The globalization of artistic practices is most readily evident in art works increasingly exhibited in cultural contexts outside where they were produced. The proliferation of international biennales and traveling exhibitions exemplifies this shift. And, even as or perhaps because, the works travel to contexts beyond those they immediately address or relate to, questions of site-specificity and sensitivities to ‘locating’ the work within these contexts have become heightened. This workshop will deliberate and expand on the question of how art travels drawing on a number of my curatorial projects from China, Mexico, USA, Indonesia, Singapore, New Zealand, Germany and Japan with a view to enable participants to develop their own positions and/or problems in relation to issues of site-specificity, cross-cultural translation and globalization vis a vis loc(aliza)tion.

The workshop will be introduced by Dr Danny Butt, Associate Director (Research), Victorian College of the Arts. 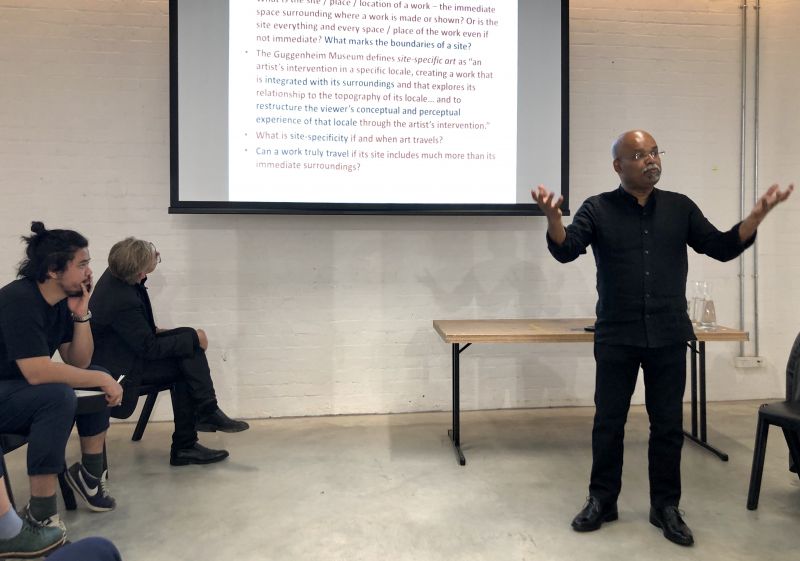 Gunalan Nadarajan, an art theorist and curator working at the intersections of art, science and technology, is Dean and Professor at the Penny W. Stamps School of Art and Design at the University of Michigan. His publications include Ambulations(2000), Construction Site (edited; 2004) and Contemporary Art in Singapore(co-authored; 2007), Place Studies in Art, Media, Science and Technology: Historical Investigations on the Sites and Migration of Knowledge(co-edited; 2009), The Handbook of Visual Culture(co-edited; 2012) and over 100 book chapters, catalogue essays, academic articles and reviews. His writings have been translated into 16 languages. He has curated many international exhibitions including Ambulations(Singapore, 1999), 180KG(Jogjakarta, 2002), media_city (Seoul, 2002), Negotiating Spaces(Auckland, 2004) and DenseLocal(Mexico City, 2009) and Displacements(Beijing, 2014). He was contributing curator for Documenta XI (Kassel, Germany, 2002) and the Singapore Biennale(2006) and served on the jury of a number of international exhibitions, like ISEA2004(Helsinki / Talinn), transmediale 05(Berlin), ISEA2006(San Jose), FutureEverything Festival(Manchester, 2009), ISEA2010 (Istanbul) and ISEA2019(Gwangju). He was Artistic Co-Director of the Ogaki Biennale 2006, Japan and Artistic Director of ISEA2008 (International Symposium on Electronic Art)in Singapore.

He is active in the development of media arts internationally and has previously served on the Board of Directors of the Inter Society for Electronic Artand is on the Advisory Boards of the Database of Virtual Art(Austria), Cellsbutton Festival(Indonesia) and Arts Future Bookseries (UK). He has also served as an advisor on creative aspects of digital arts and culture to the UNESCO and the Smithsonian Institution. He served on the Board of Directors of College Art Association (2014-18) and is currently on the International Advisory Board of the ArtScience Museum (Singapore), the Advisory Board of the New Media Caucus and Joint Advisory Board of VCUArts Qatar. He serves on the Editorial Advisory Board of the Edinburgh University Press book series, Technicities. He continues to work on a National Science Foundation funded initiative, Network for Science Engineering, Art and Design, to develop and support a national network for collaborative research, education and creative practice between sciences, engineering, arts and design. He also served on the committee for the Integration of STEM, Humanities and Arts in Higher Education Report of The Board on Higher Education and Workforce (BHEW) of the National Academies of Sciences, Engineering, and Medicine, USA. In 2004, he was elected a Fellow of the Royal Society of Art.

He has served in a variety of academic roles in teaching, academic administration and research for almost three decades in several institutions including MICA (Maryland Institute College of Arts), Pennsylvania State University and Lasalle College of the Arts, Singapore.