Indonesia is the world’s fourth most populous country, host to striking levels of human diversity, regional patterns of admixture, and varying degrees of introgression from both Neanderthals and Denisovans. However, it has been largely excluded from the human genomics sequencing boom of the last decade.

To serve as a benchmark dataset of molecular phenotypes across the region, Irene Gallego Romero (MIG Group leader), Katalina Bobowik (MIG PhD student) and colleagues generated genome-wide CpG methylation and gene expression measurements in over 100 individuals from three locations (See Figure 1 below) that capture the major genomic and geographical axes of diversity across the Indonesian archipelago.

Investigating between- and within-island differences, they found up to 10% of tested genes are differentially expressed between the islands of Mentawai (Sumatra) and New Guinea. Variation in gene expression is closely associated with DNA methylation, with expression levels of 9.7% of genes strongly correlating with nearby CpG methylation, and many of these genes being differentially expressed between islands. Genes identified in the differential expression and methylation analyses are enriched in pathways involved in immunity, highlighting Indonesia tropical role as a source of infectious disease diversity and the strong selective pressures these diseases have exerted on humans. Finally, they identified robust within-island variation in DNA methylation and gene expression, likely driven by very local environmental differences across sampling sites.

Together, these results strongly suggest complex relationships between DNA methylation, transcription, archaic hominin introgression and immunity, all jointly shaped by the environment. This has implications for the application of genomic medicine, both in critically understudied Indonesia and globally, and will allow a better understanding of the interacting roles of genomic and environmental factors shaping molecular and complex phenotypes. 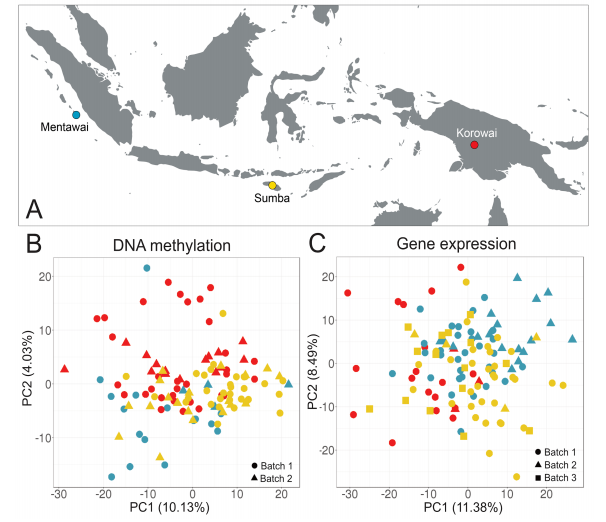 Figure 1 (from paper). Sampling locations and overview of DNA methylation and gene expression variation among the study samples. (A) Colors indicate island populations: Mentawai, blue; Sumba, yellow; Korowai, red. PCA was performed on the top 10,000 most variable methylation probes and the top 1,000 most variable genes, determined by the sample-wide coefficient of variation. The first two axes of variation from the principal component analysis in the (B) DNA methylation and (C) gene expression data after correcting for confounding effects are driven by between-island differences. Plotting shapes indicates sequencing/array batches.