LAW UNTO ITSELF | Cait Storr 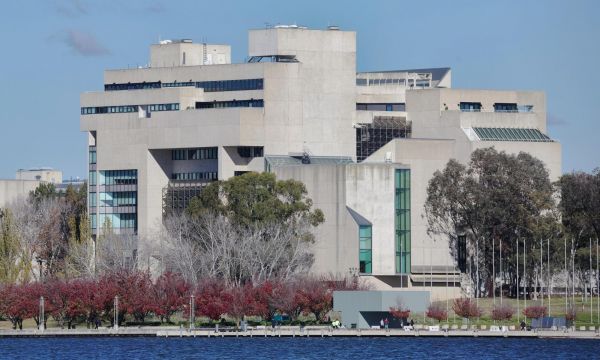 The High Court is renowned as an exemplar of late modern brutalism in Australia. Forty metres tall and quintessentially brutalist in its commitment to exposed concrete, the building is officially described as ‘monumental and asymmetrical, but also functional’.[2] Approached from below via an expansive promenade, the commanding exterior with its sheer fall of glass gives way to a vaulting public atrium guarded by two imposing columns. Moody with natural light, the atrium is cut through with stark diagonals and stairways that lead in and out of shadow upward to the courts. Designed by Edwards Madigan Torzillo Briggs and opened by the Queen in 1980, the High Court was indeed a late contribution to the architectural style defined most famously by English critic Reyner Banham in the mid-1950s. Banham’s original essays on the new brutalism radiate early Cold War atmospherics. Both Banham and the Smithsons famously insisted that brutalism— if there was such a thing—was an ‘ethic, not an aesthetic’.[3] There was no room for aesthetic affectation in the sobriety of postwar social reconstruction that birthed Europe’s brutalist icons, including Le Corbusier’s Unité d’Habitation in Marseilles and the Barbican in London. There were bombsites to be rebuilt, communities to be remodelled. Pretence was to be stripped from state monumentality. The materials of modern construction were to be embraced, and modernity itself remade.[4]

This is a preview of 'Law unto Itself'. The full article can be found in Art + Australia Issue Five.

Cait Storr is Research Fellow with the Institute of International Law and the Humanities at Melbourne Law School. Working at the intersection of law, history and politics, her current research deals with tensions between the law of private property and the law of territory in postcolonial states.