The articles in this volume represent a range of responses to the idea of Australian rock art in an expanded disciplinary field – expanded, that is, beyond its uses in archaeology and its absence in art history. 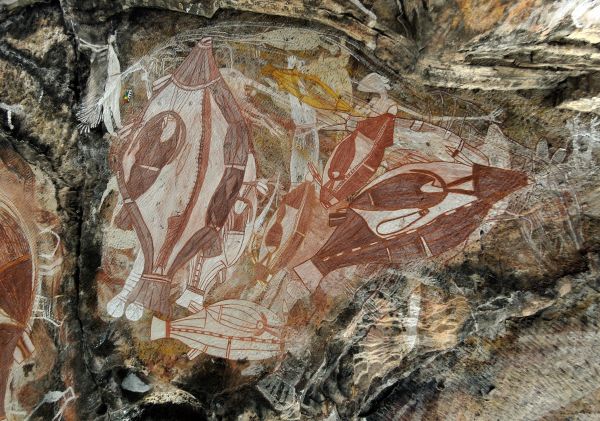 Susan Lowish and Robert Gunn present a parrallel structural analyses of the rock art site Nawarla Garbarnmang in central Arnhem Land and the Sistine Chapel in Vatican City to demonstrate that art historical and archeological methods and methodologies cross the disciplinary divide. Ursula Frederick considers paintings made by Brett Whiteley on sandstone walls in The Drip Gorge of New South Wales to explore the work from art history and rock art perspectives. Sarah Scott discusses 'reconstructions' of the rock art of Oenpelli by the modernist Australian artist James Cant, who had befriends the archaeologist Charles Mountford. Darren Jorgensen revisits the controversy around Lucas Grogan's approprations of sorcery figures and mam, malevolent spirits, arguing that such transgressions of rock art have been co-opted into a logic of cultural property that has emerged since the era of Native Title and the history wars in Australia. Natalie Lynch presents a new history of the little-known Castle Hill Saint rock painting outside Townsville, North Queensland, as an anachronistic history and dialogical model of constitutional decolonisation. Helen McDonald examines the efficacy of contemporary digital artist Craig Walsh's collaborative work about the co-existence of mining and ancient rock art in the context of Patrick Wolfe's theory of settler colonialism. Clyde McGill provides one artist's experience of the rock art at Murujuga and the industrial colonisation of the site, which he considers through the trope of witness and a subsequent book of prints. Plus reviews.

The Australian and New Zealand Journal of Art is published by the Art Association of Australia and New Zealand and is editorially hosted by the Centre of Visual Art (CoVA) at the University of Melbourne. It is published in hard copy and online by Taylor and Francis. AAANZ is Australia’s professional body for art and design historians, arts writers, artists, students of art history and theory, and museum professionals. The Journal is Australasia’s principal refereed art history journal and is dedicated to the study of art history and its various emanations including art practice, theory and exhibition.